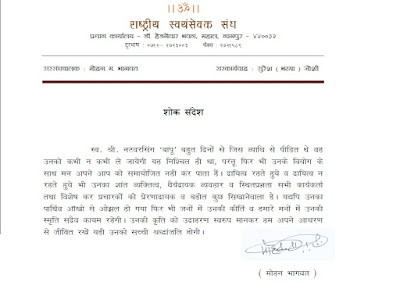 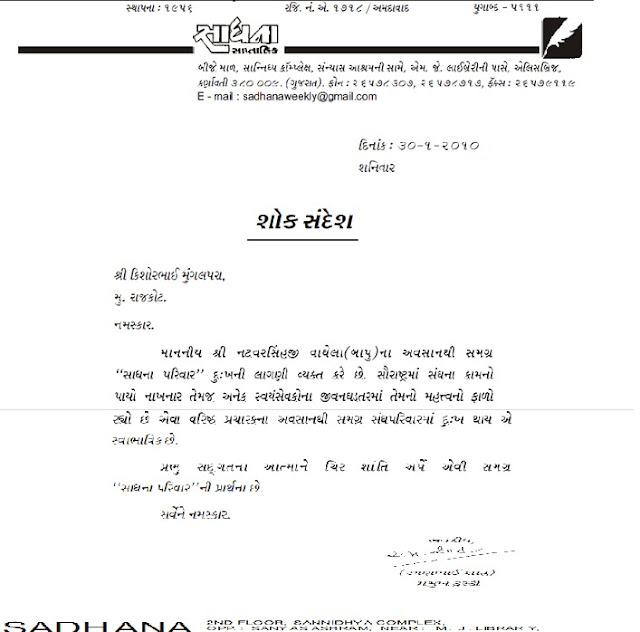 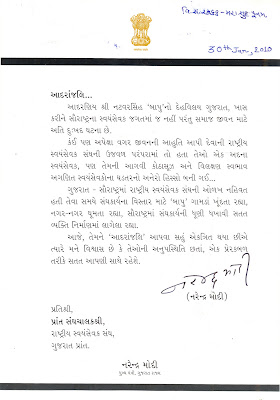 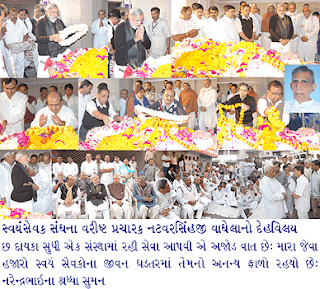 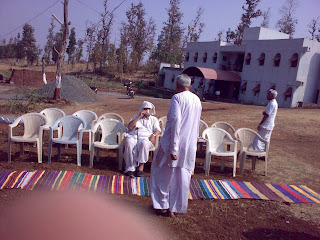 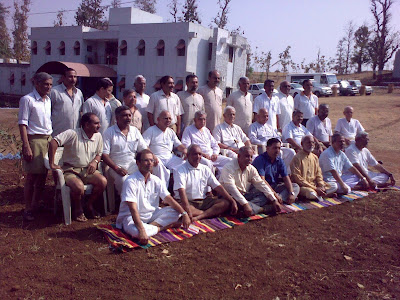 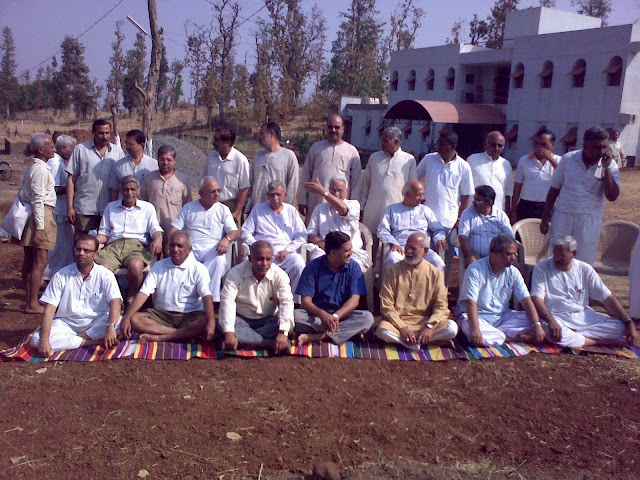 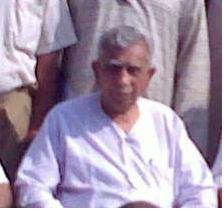 Late Natwarsinhji Lakhdhirsinhji Vaghela,
one of the elder pracharak of Gujarat RSS (Rashtriya Swayamsevak Sang) and member of prant karyakari mandal, passed away on 26th January2010

Natwarsinhji known with nick name 'Bapu' was born in 1922 in Limbadi. He was born and brought up in patriotic family and atmosphere. He did his primary education in Limbadi itself and then went to Bhavnagar for graduation study at Shamaldas Arts College. He left college study to work for RSS. He was required to work as teacher as his father passed away. He worked as physical teacher in school. He won medal in high jump and polo jump at that time. He also did correspondence course for homeopathy.
He was in close contact with Dilawarsinh Rana son of freedom fighter and kanikai Sardarsinh Rana. He was inspired to join and work for RSS in that young age. He left study and job too for full time work of RSS Pracharak in 1945. He worked in kapadvanj Taluka initially. Then he worked as Jilla vibhag and sambhag pracharak too. He was member of prant karykari mandal Rss of Gujarat till his death. He was also looking after off al trust related to RSS. He was guiding to BMS (Bharatiya Mazdoor sangh too. He also worked for few years at Killa Paradi at Pandit Satvalekarji Ashram.
He was very kind, noble and simple living personality. He worked years together till age 87. He never expected anything form anywhere. He was very near to so many swayamsevak and their family members. He was taking just once a day simple food. During World War 2 he left eating sugar, as it was imported from Morasius. But he contained it till his end. He went on walking and even on bicycle for RSS pravas. He was moving in most of sarashtra area n motorcycle. He invaluably drives his two-wheeler till age 85 years. He was very kind to teach anyone by simple self-exampled. He never gave big lecture but did small task to inspire so many. He was pioneer of RSS work in Saurashrta area.
He was very humble and worrying for every one whom he knows. In last days of illness he asked his Sarathi (Driver) Harpalsinhji , what you expect from me, let me know before I leave this world. He tried to inquire and talk with one vibhag pracharak for recently detected his Diabetes, even thought he was in bed and not bale to speak well. He was giving simple examples to follow. I have heard his simple lecture in many times in RSS camp and Bethak. One of those was in RSS Sangh Sikhsa varg at Porbandar 2003 May

He was ever asking to work and meet people even in his bed-ridden illness. He was practicing to go for daily shakha without any gap. In his last illness too, he never left his Sangh Prathrana.
He was having little bit joint problem after 85 years of age. And ski problem ageing process. He was detected having Acute Myeloid leukemia on October 2009 when he was having pneumonia. Later on he was kept on drug and good vigilance for general health. But disease process continued to rise and he was admitted in Dr. Vallabhbhai Kathiriya’s Hospital. He was looked after by expert intrevenist. Ultimately his soul left his body on 26th January 2010 at 4.45 pm in hospital only
His body was kept for darshan by all swayamsevak in Rajkot karyalay, Dr Headgear Bhauvan. His body was left to panchtatva at Ramnath Smashan ghat on 27th January at 10 am.
Many swayamsevak came to pay respect t his last voyage. Even Narendra Modi CM, Gujarat and much renowned personality came to pay respect to him.

I have written this in blog to pay small shranthajali to him. I ask all friends, and swayamsevak to write about him and their memories with Natwarsinhji in this blog in form of comments. If you have any memorable photos of him, please send on my email address, so we can upload to view by others