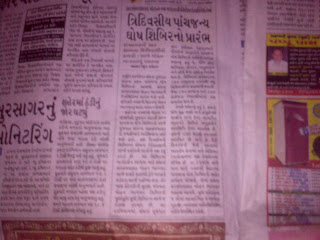 Posted by Bhadesia at 8:27 PM No comments: 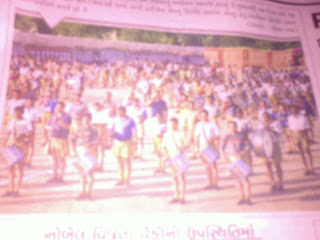 Posted by Bhadesia at 8:22 PM No comments: 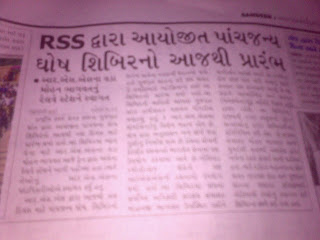 Posted by Bhadesia at 8:19 PM No comments:

NEW DELHI:  Releasing the book, Rashtriya Swayamsevak Sangh chief Mohan Bhagwat said Hindutva calls for striking a balance and believes in taking everyone along. Unlike other practices which consider only themselves supreme, Hindutava believes in respecting other faiths as well, he said, adding that national renaissance is based on national values and we must strengthen own country. Referring to Dr. Swamy's book, he said it should not be perceived as propaganda, but as research.
In his book "Hindutva And National Renaissance", released here on Monday, former Union Minister Subramanian Swamy has attempted to define the term Hindutva, place it in context with the current world order and also de-stigmatise the word.
Speaking about the book, Dr. Swamy, said he was questioned by the academia about the choice of including the word "Hindutva" in the title itself. Pointing out that there is a need to create greater public awareness about the word and what it denotes, Dr. Swamy compared it to the Swastika, the symbol that became associated with its usage by Nazi Germany and therefore got stigmatised.
"It (Hindutva), like the Hitler's use of Swastika, has got a bad name, but it does not mean that we don't use it," Dr. Swamy said. Renaissance is renewal in modern form and many thinkers have spoken about renaissance and Hindutva together, he said, adding that India is still looked at for spiritual awakening and foreign nationals still throng to India or ashrams abroad for seeking peace and ways to be happy.
Dr. Swamy said Hindutva needs to be translated into various aspects and in his book he has dealt with Hindutava in context with national security, and even commerce. "Hindutva has to be protected and we need an instrument for that," he said.
Referring to the various legal battles that he has initiated, Dr. Swamy said he draws inspiration from Swami Dayanand Saraswati who encourages him to fight on. "Swamiji asked me to file a petition on the Ram Setu issue and in that faith I filed it and we managed to get a stay and the Supreme Court asked the government to find an alternative route," he said.
Speaking at the function Man. Sudarshan ji said the history of Hindus is very old and only in Hindustan people called DHARTIMATA (Motherland) other says fatherland etc.He congratulated to Dr. Swamy for release of his book ''Hindutva And National Renaissance.Sh. Ashok Singhal ji also praised Dr.Swamy for his book on Hindutva and appeal to the audience that they must read this book.Swami Dayanand Saraswati gave his blessings to Dr. Swamy.

Rahul Gandhi's impassioned exhorts to youngsters to join the Indian Youth Congress (IYC) a few months back found resonance in some unlikely quarters too.

They managed to inspire  an alleged mole from the Pakistani Inter-Services Intelligence (ISI) to climb aboard the Grand Old Party's youth wing.


Rahul Gandhi's oratorial skills and power of persuasion ensured that lakhs of youngsters, including Mozawala, enrolled for the youth chapter of India's Grand Old Party

Eight months ago, Gandhi had appealed to the country's youth to join the IYC to boost his supporter base. Following his entreaty, lakhs of youngsters had signed up for membership of the party's youth chapter.

As it turns out, one of them was Javed Abdul Gafoor Mozawala (28), recently arrested by the Mumbai Crime Branch on charges of forgery, spying on the country and violating the Official Secrets Act.

Mozawala reportedly enrolled himself from ward number 222 in south Mumbai.

"A total of 1,390 youth joined the Congress Party from ward number 222 eight months back.

Among them, Mozawala had also filled a membership form," said a youth leader from south Mumbai, on condition of anonymity.

Sources from the party told MiD DAY that he was sponsored by Naved Shaikh, son of oil mafioso Mohammad Ali Shaikh, allegedly a Dawood Ibrahim aide arrested for the murder of diesel don Chand Madar.

Naved has spent around Rs 25 lakh in the way of membership fees for various aspiring members including Mozawala.

The idea was to ascend the ladder and become a party suzerain by initiating as many youngsters as possible into the youth wing.

But, Naved was kicked out of the party after his father's alleged underworld links were exposed.

Mumbai Crime Branch officials arrested Mozawala on December 10 from his residence at Infinity Tower in Mazgaon.

He was produced in the Killa Court yesterday where Additional Chief Metropolitan Magistrate V V Bambarde remanded him to police custody until December 22.

Mozawala alleged in court that he had been subjected to third-degree torture by cops during interrogation.

According to the police, Mozawala, an alleged close associate of Chhota Shakeel, had been relaying sensitive information to two Pakistani diplomats on deputation at the Pakistani High Command in Delhi.

The Crime Branch has recorded the statements of Mozawala's confederates Munir Khan and Fakir Ali as well. Both attested to the fact that Mozawala is an ISI accessory.

Mozawala's brother, Asif, and his wife, however, rubbished the allegations.

The Other Side
Javed Juneza, Congress president, Mumbadevi constituency, said, "I don't know the details but I believe he could have enrolled in the party's youth wing through open membership."

By questioning the legitimacy of India's sovereignty over Jammu & Kashmir, Beijing may be creating a future option for questioning New Delhi's locus standi to negotiate the future of the Indian territory in the Ladakh area under Chinese occupation. China could aggressively use this option if its relations with India were to deteriorate

Since January, 2010, there have been references by Chinese officials and media to the length of the Sino-Indian border as about 2,000 km. The People's Daily reported on January 7: "China and India share a nearly 2,000-km border and disputed areas cover about 1,25,000 sq km on both sides." The "2,000-km-long" boundary was mentioned in the China Daily in August 2009 in a report on the 13th round of boundary talks between the two sides. After the 14th round of the border talks held at Beijing on November 29 and 30, 2010 by Mr Shiv Shankar Menon, India's National Security Adviser, and Mr Dai Bingguo, the Chinese State Councillor, there were three important commentaries on the talks in the Chinese media — by the party-controlled Global Times, by Mr Zhou Gang, a former Chinese Ambassador to India, in the Beijing Review and by Mr Cheng Ruisheng, another former Chinese Ambassador to India, in an interview to the Chinese news channel CCTV.

The Global Times commentary said that the Chinese Government's position was that both countries "will take into consideration each other's concerns, and work toward an equitable and justified settlement of border issues that is acceptable to both sides". However, it quoted Mr Zhao Gancheng, a leading Chinese strategist, as saying "Indian activities near the border" and "remarks made by senior Indian officials who played up the China threat" had "harmed the chances" of reaching a quick resolution. It did not make any reference to the length of the Sino-Indian border.

However, the comments of the two former Chinese Ambassadors to India made specific references to the length of the border. Mr Gang was quoted as saying, "The Sino-Indian border stretches for about 2,000 km, and the two countries have never officially mapped it out. For a long time, the two sides abided by a traditional customary line based on their respective administrative regions." Mr Ruisheng was quoted as saying, "China and India share roughly a 2,000 kilometer border which has never been formally delineated."

In subsequent reports as curtain raisers to the just concluded visit of Prime Minister Wen Jiabao to New Delhi from December 15 to 17, 2010, sections of the Chinese media specified the approximate length of the Sino-Indian border as about 2,000 km. A Xinhua report from Beijing disseminated before the departure of Mr Jiabao to India described the Sino-Indian border as nearly 2,000-km long. Xinhua's reference was reportedly based on an official briefing by the Assistant Foreign Minister of China, Mr Hu Zhengyue to the Beijing Press corps on December 13. On December 14, in an interview with the Indian Ambassador to China, Mr S Jaishankar, the Global Times asked about the reported tensions on the border. In response, Mr Jaishankar said, "The reality contradicts any alarmist depiction of the situation on the border, whether in India or in China. We have a long common border of 3,488 km." In publishing the interview the Global Times chose to add the following comments: "There is no settled length of the common border. The Chinese Government often refers to the border length as being 'about 2,000 km'."

India has always been estimating the approximate length of the Sino-Indian border as about 3,500 kms in all the three sectors — Eastern, middle and Western — taken together. While it is about 2,000 kms in the Eastern and the middle sectors taken together, it is another about 1,500 kms long in the Western sector in Jammu & Kashmir. China, which had never openly questioned the Indian estimate of the length of the common border before, is now unilaterally seeking to exclude from consideration during the border talks the dispute between India and China over the Chinese occupation of a large territory in the Ladakh sector of Jammu & Kashmir. In fact, it is seeking to question India's locus standi to discuss with China the border in the Jammu & Kashmir area in view of Pakistan's claims to this area. It is trying to bring in Pakistan as an interested party in so far as the border talks regarding the Western sector are concerned. It wants to change the format of the border talks in order to keep it confined bilaterally to the Eastern and middle sectors and expand it to a trilateral issue involving India, China and Pakistan in the Western sector. The exclusion of the border in the Jammu & Kashmir sector from its estimate of the total length of the border is another indication that it does not recognise India's claims of sovereignty over Jammu & Kashmir.

This has come in the wake of its decision to stop issuing regular visas to Indian citizens residing in Jammu & Kashmir and to issue them only stapled visas. It is apparent that this is part of a well thought-out policy of unilaterally changing the ground rules of the border talks. It had earlier allegedly changed the ground rules in the Eastern sector by going back on a prior understanding with Prime Minister Manmohan Singh that the border should be demarcated in such a manner as not to affect populated areas. It is now going back on its previous stand in the Western sector by seeking to challenge India's locus standi in view of its dispute with Pakistan.

Even at the risk of a further delay in the exercise to solve the border dispute, India should not agree to any change in the ground rules which would restrict the border talks only to the Eastern and middle sectors and exclude the Western sector on the ground that India has a dispute over this area with Pakistan.

The writer, a former senior officer of R&AW, is a strategic affairs commentator. 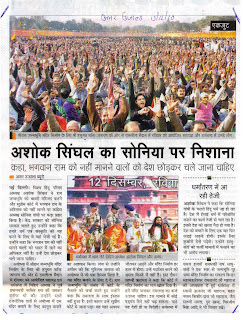 Posted by Bhadesia at 8:13 AM No comments:

HOW SHOULD WE LIVE IN THIS WORLD?