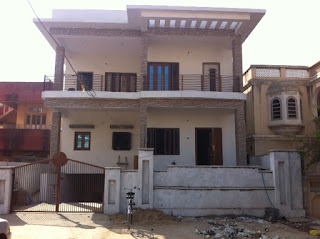 Sent from my iPhone


Sent from my iPhone
Posted by Bhadesia at 12:23 PM No comments:


Bharadwaj, a youth from Kanchipuram, Tamilnadu went to Japan in the 10th century (736 AD). To the Japanese he was 'Baramon'. He taught them Buddhism, Ramayana, Sanskrit, Dharma, Hindu Philosophy and gave them culture, art and music. Today everything with which the Japanese rightly feel proud of as their ancient heritage and culture was given to them by this monk. The Japanese have three scripts - one of them based on Tamil and Sanskrit. That was given by "Baramon Bharadwaj".
A Japanese delegate Shri Shuzo Matsunoga participated in the Fifth World Tamil Conference held at Thanjavur in 1981 (30 years ago). He presented a paper on 'Thirukural & Thiruvalluvar in the eyes of Japan'. Muthu, now 91years young, of Omalur off Salem, Tamilnadu came in contact with Sri Shuzo Matsunoga after the Conference. They discussed at length the Tamil culture and literature. Shuzo translated the English version of G U Pope's Thirukuraal (aphorisms) as guided by Muthu Ji. Shuzo also translated various books of Subramania Bharathi (Kuil Paatu), Naaladiar, Vallalarr poems, Manimegalai and Silapathigaram into Japanese language. Shuzo not only translated the literature but also the culture/rituals of tamils from birth to death, which was greatly relished by the Japanese. Shuzo also bagged a prize for translation of tamil work in 1985 organized by University of Tanjore who also authors a book "My India as seen through letters". 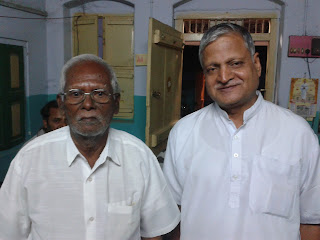 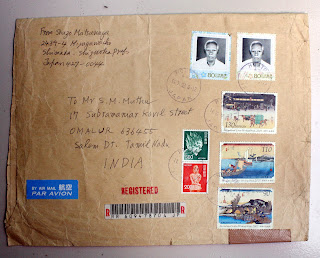 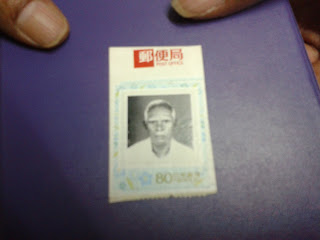 Postal Stamp of Muthu
Now, the Government of Japan has included this Thirukural as a lesson in the text book at college level. To cap it all, when the Japanese Government proposed to release a postal stamp to honour Shuzo Matsunoga for his works, he humbly refused and said, "To translate this tamil literature into Japanese language, Muthu from Salem has helped me. So the credit goes to him". On his recommendation the Japanese Government released a postal stamp on Muthu (Salem) for 80 Yen (Rs.27/-) in 2007. Muthu, a humble and noble person, did nothing for selfish end. It was all for the tamil literature. He communicated all this over to his friend in Japan only through 200 letters, while, in the Facebook age, individuals transmit info electronically.

Shri Ravikumar of Vishwa Vibhag during his tour of Tamilnadu, met Muthu Ji. He was received well. Muthu ji lauded RSS for its social service and patriotic fervor.


Ravikumar of Vishwa Vibhag met Pasupathi, a wall writer of Salem Tamilnadu who inspires people by writing telling quotes on the walls of Salem City. His father, a freedom fighter inspired him to do something good to the society and to the nation. On his motivation, Pasupathi spends three hours weekly (on Thursday) to write good quotations at 20 places which will be displayed for a week. He has been continuously doing this service silently for about 20 years. His quotations have inspired many people. Recently, when his quotations were uploaded in the Face Book, (www.facebook.in/mmmcorner) Dr. Raghunathan, Brimingham, UK was inspired and compiled the quotations as a book on the occasion of his daughters' wedding. Thus the good word spreads. 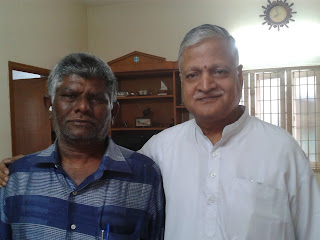 WHY THE DECLINE OF WEST IS BEST FOR US & THEM

WHY THE DECLINE OF WEST IS BEST FOR US & THEM

Ten years ago, America had Steve Jobs, Bob Hope and Johnny Cash. Now it has no Jobs, no Hope and no Cash. Or so the joke goes.

Only, it's no joke. The line is pretty close to reality in the US. The less said about Europe the better. Both the US and Europe are in decline. I was asked by a business channel in 2008 about recovery in the US. I mentioned 40 quarters and after that I was never invited for another discussion. Recently, another media person asked me the same question and I answered 80 quarters. He was shocked since he was told some "sprouts" of recovery had been seen in the American economy.

It is important to recognize that the dominance of the West has been there only for last 200-and-odd years. According to Angus Maddison's pioneering OECD study, India and China had nearly 50 percent of global GDP as late as the 1820s. Hence India and China are not emerging or rising powers. They are retrieving their original position.
The dollar is having a roller coaster ride at present. In 1990, the share of the G-7 in world GDP (on a purchasing power parity basis) was 51 percent and that of emerging markets 36 percent. But in 2011,
it is the reverse. So the dominant west is a myth.

Similarly, the crisis. It is a US-Europe crisis and not a global one. The two wars - which were essentially European wars - were made out to be world wars with one English leader commenting that 'we will fight the Germans to the last Indian'. In this economic scenario, countries like India are made to feel as if they are in a crisis. Since the West says there's a crisis, we swallow it hook, line and sinker. But it isn't so. At no point of time in the last 20 years has foreign
investment - direct and portfolio - exceeded 10 percent of our domestic
investment. Our growth is due to our domestic savings which is again
predominately household savings. Our housewives require awards for our
growth not any western fund manager.

The crisis faced by the West is primarily because it has forgotten a
six-letter word called 'saving' which, again, is the result of forgetting another six letter word called "family". The West has nationalized families over the last 60 years. Old age, ill health, single motherhood - everything is the responsibility of the state.

When family is a "burden" and children an "encumbrance," society goes for a toss. Household savings have been negative in the US for long. The total debt to GDP ratio is as high as 400 percent in many countries, including UK. Not only that, the West is facing a severe demographic crisis. The population of Europe during the First World War was nearly 25 percent and today it is around 11 percent and expected to become 3 percent in another 20 years. Europe will disappear from the world map unless migrants from Africa and Asia take it over.
The demographic crisis impacts the West in other ways. Social security goes for a toss since people are living longer and not many from below contribute to their pensions through taxes. So the nationalization of families becomes a burden on the state.

European work culture has become worse with even our own TATA complaining about the work ethic of British managers. In France and Italy, the weekend starts on Friday morning itself. The population has become lazy and state-dependent.

In the UK, the situation is worse with drunkenness becoming a common
problem. Parents do not have control over children and the Chief Rabbi of the United Hebrew Congregation in London said: "There are all signs of arteriosclerosis of a culture and a civilization grown old. Me has taken precedence over We and pleasure today over viability tomorrow." (The Times: 8 September ).

Married couples make up less than half (45 percent) of all households in the US, say recent data from the Census Bureau. Also there is a huge growth in unmarried couples and single parent families (mostly poor, black women). Society has become dysfunctional or disorganized in the West. The government is trying to be organized. In India, society is organized and government disorganized. Because of disorganized society in the West the state has to take care of families. The market crash is essentially due to the adoption of a model where there is consumption with borrowings and no savings. How long will Asian savings be able to sustain the western spending binge? According to a recent report in The Wall Street Journal (10 October 2011), nearly half of US households receive government benefits like food stamps, subsidized housing, cash welfare or Medicare or Medicaid (the federal-state health care programs for the poor) or social security.

The US is also a stock market economy where half the households are
investors and they have been hit hard by bank and corporate failures. Even now less than 5 percent of our household financial savings goes to the stock market. Same in China and Japan.

Declining empires are dangerous. They will try to peddle their failed models to us and we will swallow it since colonial genes are very much present here. You will find more Indians heading global corporations since India is a very large market and one way to capture it is to make Indian sepoys work for it.

A declining West is best for the rest and also for the West, which needs to rethink its failed models and rework its priorities. For the rest-like us-the fact that the West has failed will be accepted by us only after some western scholars tell us the same. Till then we will try to imitate them and create more dysfunctional families.

We need to recognize that Big Government and Big Business are twin dangers for average citizens. India faces both and they are two asuras we need to guard against. The Leftists in the National Advisory Council want all families to be nationalized and governed by a Big State and reform marketers of the CII variety want Big Business to flourish under crony capitalism. Beware of the twin evils since both look upon India as a charity house or as a market and not as an ancient civilization. 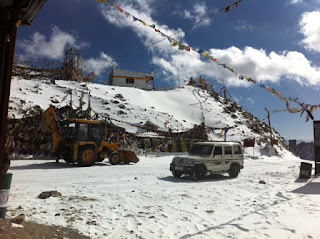 Posted by Bhadesia at 7:11 PM No comments: 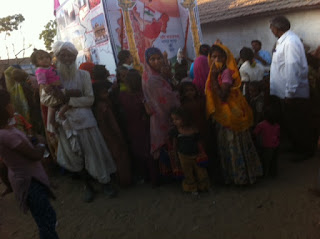 Posted by Bhadesia at 7:01 PM No comments: