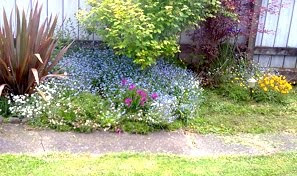 Have you been in a neighborhood park during one of these days ?
If not, just spare some time, preferably in the morning around seven.

You will find plants laden with colorful flowers, trees shedding old, dry leaves and beginning to adorn fresh new ones, and the divine morning breezeenergizing every mind, body and soul. There is transformation for the good all around.

The Mother Nature is at Her cheerful best to celebrate and welcome theupcoming new year.

Exactly fifteen days after HOLI celebrations, comes the first day of the HINDU CALENDER – VIKRAM SAMVAT named after the legendary King Vikramaditya who ushered in the golden era of the Indian history.

This day signifies a "NEW AUSPICIOUS BEGINNING" in the true sense andnot merely a change of date.

This day was chosen by the wiserly to coronate LORD RAM on the throne of Ayodhya after HE had laid to rest, permanently, the terrorism unleashed by demon king Ravan. In the modern times, Swami Dayanand laid the foundation of the ARYA SAMAJ on this day, to infuse new vitality in the Hindu society.

NAVRATRA celebrations also begin on this very day marked by seven days of fasting---a scientific way of switchover of dietary pattern from winter to summers.

I wish you and your family a Nav Samvat full of peace and prosperity.

Let us resolve to align our New Year festivities with Vikram Samvat and I promise, you aren't going to be alone----NATURE IS WITH YOU.

Windows 7: Find the right PC for you. Learn more.
Posted by Bhadesia at 6:54 PM