Arun Dev, TNN Mar 1, 2012, 05.30AM IST
BANGALORE: Two officials of a non-governmental organisation were detained by police for allegedly sexually harassing and brutally assaulting children at its shelter.
Read more »

Governments spar, but people of Pakistan, India want to connect

By Gyanendra Kumar Keshri | IANS India Private Limited – Sun 26 Feb, 2012
Karachi, Feb 26 (IANS) It was around 11 pm. Being hungry, I was looking for food at the Port Grand food street, a newly developed food and entertainment complex along the seaside of Pakistan's commercial capital.

Where will he strike next? 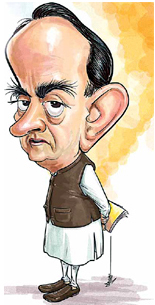 He is accused of being a destroyer, the one who changes parties  frequently, one who strikes at will, a megalomaniac, unpredictable and a Nehru-Gandhi family baiter. Economist-turned politician, Dr Subramanian Swamy fields the volley of accusations in his inimitable style and shares his views and plan of action in an exclusive interview with K Ramachandra Murthy

Dr Subramanian Swamy, the Harvard-educated economist-turned-politician, has been a fighter throughout his political career. Coming from a family with leftist  ideology, his right winged fundamentalism faced much derision. He calls Rajiv Gandhi a close friend, but has been a crusader against the Nehru-Gandhi family; his ardent Hindutva doesn't seem to impress the BJP who are wary of inviting him into the party.