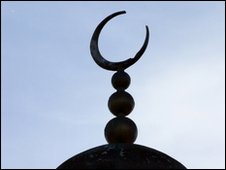 Half of those questioned linked Islam with terrorism, according to the survey
Most people in the UK associate Islam with extremism and the repression of women, a survey has suggested.
The online YouGov poll was conducted for moderate Muslim organization the Exploring Islam Foundation.
Some 58% of those surveyed said they linked Islam with extremism.
Asked if Muslims had a positive impact on British society, four out of 10 disagreed with the statement while seven out of 10 said the religion encouraged the repression of women.
Negative picture
Half linked Islam with terrorism, just 13% thought it was based on peace and 6% associated it with justice.
BBC home editor Mark Easton says the survey, conducted by YouGov for the foundation, paints a negative picture of British attitudes to Islam.
The foundation has been established to challenge what it calls "damaging stereotypes" and misconceptions about the religion.
It represents part of an international liberal Islamic movement that has developed to challenge negative views among non-Muslims and counter those Muslims who claim Western cultural values are a threat.
The foundation's campaign stresses the ways in which Muslims balance religious tradition with contemporary human rights and social responsibility.
--
Nothing is permanent..... even your problems.