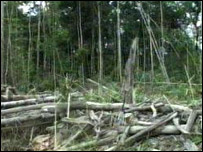 Meet Smt. B.Jyoti Nirmala, Kanyakumari District Collector. She was awarded the `Kalpana Chawla Award For Bravery´ by Chief Minister M.Karunanidhi on Independence Day yesterday. She is credited with putting an end to the rampant river sand smuggling by criminal gangs in the district through her daring pre dawn raids on the riverside. She has also prevented destruction of forest by illegal tree - felling through her stern action. Nirmala has served as Tehsildar in the same district and she had won the hearts of villagers by preventing or solving caste conflicts by her immediate intervention and effective counseling. On receiving the award, she thanked not only the state government but also those numerous village women whose valuable tip-offs had helped her in curtailing sand smuggling. Media Reports, August 16, 2008