Architecture is a product of geographical conditions, materials available, levels of development of society and the need for protecting oneself from the environment. Architecture is nor denominational.

It is cultural and civilisational. The term Islamic architecture is part of the same project that had divided history into Hindu and Muslim. The term is a colonial orientalist legacy. 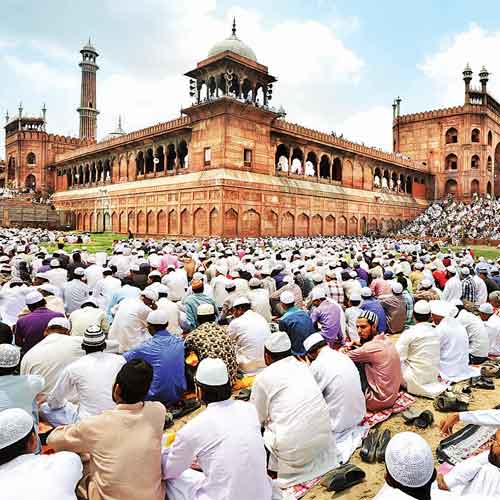 Read any text book of history or architecture in the subcontinent, and increasingly in the world outside, and you will come across the term Islamic Architecture.

The elements of Islamic Architecture, we are told, are the arch, the dome and the minar or the minarets.

Let us take these one by one and see if they can be traced back to Islam.

The first large-scale use of the true arch, in aqueducts, is ascribed to the Romans in the 3rd century BCE. The Roman engineers acquired many of their engineering skills from the Etruscans (ancient Italians going back to the 7th century BCE) and the Greeks.

The Corbelled arch which preceded the true arch goes back much further in history and the Trabeate arch, the precursor to the Corbelled, would probably go back to the first gate built by humans in a pre-historic time, difficult to pinpoint now.

The first arch was probably two large pieces of wood dug into the ground with another piece of wood resting on top of these two beams. It was this that was to later transform into the post and lintel arch or the Trabeate, the most commonly known example of which would be the Stonehenge. The Trabeate was probably created simultaneously in several civilisations. Or perhaps even before civilisations began and continues to be used in all standard rectangular or square doors and windows till today. The Trabeate was to evolve into the true arch through a long process of evolution that included the creation of the Corbelled or the false arch. The Corbelled can be seen for a long time along with the true arch — throughout the ancient and medieval periods — not only in the subcontinent, but also in different civilisations scattered worldwide.

The true arch defined by Leonardo da Vinci as "strength created by two weaknesses" was to find expression in various forms including, but not restricted to, the Horse Shoe, the Trefoil, the Gothic, the Tudor, the Lancet, the Elliptical and the Pointed. The Pointed Arch became more popular in the Middle East and central Asia and travelled to north India in the 13th century. By the 17th century — the time of Mughal Emperor Shahjahan — another variation of the true arch, known as the Scalloped or the Cusped arch came to rule the roost. Structures built in the late 17th and 18th centuries using this arch came to be described as Indo-Islamic architecture. And when elements of the Gothic revival architecture were mixed with this form it came to be known as  Indo-Saracenic or described variously as Indo, Mughal or Hindoo-Gothic. Gradually the latter terms fell out of use but Islamic and Indo-Islamic remained.

The Pantheon was built in 126 CE, it is even today in use, and 2000 years after it was built, continues to be the largest unreinforced concrete dome in the world. The dome travelled to Byzantium and then to central Asia. The Hagia Sofia, built in 537 CE as a Greek Orthodox Basilica, was turned into a Roman Catholic Church for a while, but reverted to the control of the Greek Orthodox Church and later become a mosque, and since 1931 it has been a museum.

The Sasanid or the Neo-Persian Empire (224-651 CE) began to build large-scale domes and it was perhaps the neo-Persians that developed the technique of the squinch, a technique that gradually transformed a square into a circle upon which a dome could be constructed.
The minar, probably derived from manara (Light House) in Arabic, is in all probability a pre-Islamic architectural form, that could have been built as a guide at night. Later incorporated into the mosque architecture, in India, the mosque-minar association is not so old.

The 13th century Kuttichira Mosque in Calicut, built by the Arab trader and ship-owner Nakhuda Miskal, too, is not adorned with domes or minars. The mosque built by Qutb-ud-din Aibak in 1293 and the first mosque in Delhi too has no minar. The Qutub Minar was not a part of the mosque. Its construction had started a year earlier and it was a victory tower. The minar became a part of the mosque as a result of the two expansions of the mosque, initiated by Altamash (Iltutmish) and Ala-ud-din Khilji.

From the 13th century till the building of the Jama Masjid by Shahjahan, none of the mosques in Delhi has a minar. If a muezzin was to climb either the Qutub or the Jama Masjid minars to call the believers to prayer, he will not be heard. At the Qutub no one will hear him on the ground and at Jama Masjid no one outside the mosque will be able to hear him. The minar was in all probability not used for calling the faithful to prayers, but was prompted with a desire to reach God, who it was believed, is up there in the heavens.

The minar in a mosque, the steeple in a church, the shikhar in a temple all served the same purpose and these forms evolved when people believed the world to be flat. Old mosques in Kashmir, Indonesia, Malaysia and in a whole lot of places do not have domes or minars or arches. These forms are the product of a specific region from where they spread. They have no endearing bonds to any religion. The largest dome in the world sits atop the Basilica of St Peter.
There is another atop the White House and none of the US presidents have been Muslims.

Architecture is a product of geographical conditions, materials available, levels of development of society and the need for protecting oneself from the environment. Architecture is nor denominational. It is cultural and civilisational. The term Islamic architecture is part of the same project that had divided history into Hindu and Muslim. The term is a colonial orientalist legacy.

The writer blogs at Kafila.org and conducts heritage walks in Delhi