BHAVNAGAR: Six months ago, a doctor was all set to make a killing by selling his posh bungalow 'Chaitanya' near Crescent Circle to a Muslim family. As soon as the news spread, a group representing the saffron brigade reached his house and tried persuading him to call off the deal. When the doctor did not agree, the group held a sit-in outside his house and started chanting Ram Dhun. The agitators refused to budge till he assured them that he would scrap the deal. Finally, the bungalow was sold to a Hindu.

Saffron brigade is using Ram dhuns and Ram Darbars to thwart all deals in town where Muslims are buying properties in Hindu-dominated areas.

The brigade's modus operandi is simple: on getting information about a Hindu planning to sell his property to a Muslim, they squat in front of his house and chant or conduct Ram Darbars. They don't move from the place till the seller caves in.

The group has managed to get 10 such property deals cancelled over the past six years. 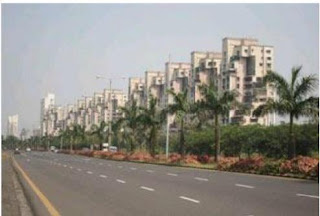 Bhavnagar was the only place in Saurashtra which saw communal riots in 2002. "Over the past five years, Hindus have started migrating from the localities where they have been living for generations after selling the property to Muslims,'' said Kirit Mistry, a VHP leader.

"We have written about it to the state government to demand the implementation of theDisturbed Areas Act in order to stop this activity."

However, Arif Kalva, a community leader, said, "Muslims in the city have progressed and become prosperous. They too aspire to live in areas where they can become part of mainstream society."
Posted by Bhadesia at 12:51 PM