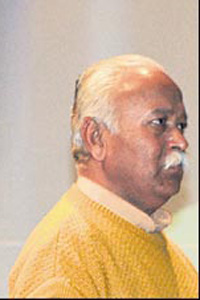 "Even 64 years after Independence, India is being threatened by China and Pakistan....with rising concern over internal security, we should give top priority to military education to students to make India strong,"Bhagwat said.

Bhonsala Military School was founded in 1937 by the staunch Hindu leader Dr B S Moonje who also played a role in mentoring Rashtriya Swayamsewak Sangh (RSS) founder K B Hedgewar.

"The Bhonsala Military School was founded by Moonje in a view to protect the nation and has been acting as a feeder institute to fulfil backlog of military officials," the RSS chief said.

Senior RSS functionary Prakash Pathak informed that the BMS was going to start a similar facility exclusively for girls in Nashik.

The BMS run by the Central Hindu Military Education Society (CHMES) is also mulling to set up a flying club and a pilot training institute besides a centre for service preparation and aeronautic engineering education.

"We are receiving proposals from the states of Madhya Pradesh, Gujarat, Uttarakhand for setting up military schools there and will soon take a call on them," Pathak said.