Swami Vivekananda- How relevant is he today? Gopinath Raina

Swami Vivekananda- How relevant is he today?
taken from Shehjar, January 2011 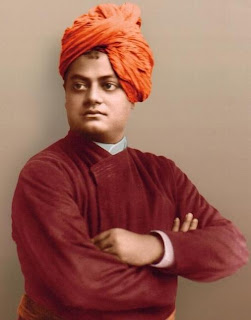 Swami Vivekananda
How relevant is he today?

Vivekananda Rock Memorial at Kanyakumari
The philosophy of service advocated by this giant among men emanated from his chore belief that "Jiva is Shiva". He would thunder in his lectures exhorting youth to "see Shiva in the lowliest and the lost". The worship of Narayana has to be through service to Daridra-Narayana, the poor, the needy and the homeless, he said.
He gave the people the clarion call to "Arise, Awake and Stop not till the Goal is Reached." The call woke up the people of India from their slumber and inertia of petty mindedness and superstitions and broke their hypnotic spell of diffidence caused by thousands of years of subjection; it inspired the seekers, the thinkers and the lay people alike and made them fearlessness and strong. "They alone live, who live for others, the rest are more dead than alive", he would often say.
It is this paradigm that inspired and influenced John Rockefeller whose life underwent a complete transformation after a personal meeting with the Indian monk. Vivekananda made Rockefeller realize that he was only an instrument and a channel and that God had given him wealth as an opportunity to help other people.

What could India teach the World?
"Each nation, like each individual, has one theme in life", he would say, and if any nation throws off its national vitality, it dies. He knew that India could teach the world, as the great American historian, Will Durant, believed, "tolerance and gentleness of the mature mind, the calm of the understanding spirit, the quite content of the un-acquisitive soul, and a unifying, pacifying love for all living things."
*Swami Vivekananda's 148th birth anniversary falls on 12th of this month.

*A journalist by profession, a scholar by temperament and a writer by choice, Gopinath Raina was inclined to the study of religion from his very young age. It was Swami Vivekananda's dynamic exposition of Hindu thought that fired his imagination while he was still at school, and by the time he entered college, he had been drawn to the writings of Gandhi, Aurobindo, Narayana Guru, Radhakrishnan and Bertrand Russel.
After retiring from Indian Information Service (I.I.S.) in 1983 where he distinguished himself as an editor, correspondent, commentator and administrator in All India Radio, he edited, AICC Journal, Varnika, (Jan.'84-Dec.'90), Koshur Samachar (March'91-Oct'95, Sanatana Sandesh,(1997-2005) and KASHEER (2003-2004),
He has been writing profusely on various aspects of Hindu thought. He enjoys writing, particularly on saints and sages, not only of Kashmir, but of the other parts of India as well. Presently he lives in Miami, and spends his time writing personal memoirs.
Posted by Bhadesia at 3:48 PM