Visiting the sprawling Campus of Sanskrit Studies Centre under Silpakorn University, Thailand was just awesome. It would not be exaggeration to state that this might be the largest Sanskrit Buildings in the world. What was surprising was its location not in India but inThailand. This Centre blessed by His Majesty the King of Thailand Rama IX Bhumibol Adulyadej whose Chaipattana Foundation provided royal charter for the land. Equally supportive has been Her Royal Highness Princess Maha Chakri Sirindhorn, who has done her Masters in Sanskrit Epigraphy, who gladly accepted to be the Patron for the SSC.

A brief meeting with its Founder Director Dr. Chirapat Prapandvidya and the incumbent Director Dr. Samniang Leurmsai was pleasant and refreshing one to listen to their plans for promotion of Sanskrit related studies in Thailand. The towering five storeyed building is  looking forward to equip with all the modern facilities for learning Sanskrit. It is expected that this Centre would get about 200 students under several programmes( with the Faculty of Archaeology)in the coming academic year. The Centre is thankful to Govt. of India who initiated its first commitment in 2003 when Dr Amarjiva Lochan as the SSC Programme Coordinator presented the case of financial support before the then Prime Minister Shri Atal Behari Vajpayee. Our Prime Minister happily approved of it. Later on, after pursuance of HRH Princess, the Govt. of India in Bangkok released the amount of 10 Million Baht( Rs. 20 Million) when Ms Latha Reddy was the Indian Ambassador to Thailand. The rest 78 Million Baht( Rs. 156 Million) was contributed by the Royal Thai Government, and the SSC is still looking forward to donations and support of 20 million Baht(Rs. 40 million) to give the final touch to its class rooms, constructing the Auditorium of 300 capacity, and developing its landscape around the Building.

The Sanskrit Studies Centre would be hosting the 16th World Sanskrit Conference in June-July 2015.

The SSC is not only an indicator to the popularity of studying subjected related to Sanskrit and Pali in Thailand but proves the dedication of local Thai scholars to keep the flame of Sanskrit alive. Hope we Indians take the cue from this craving for learning Sanskrit - the mother of all major languages of our Asian neighbors. 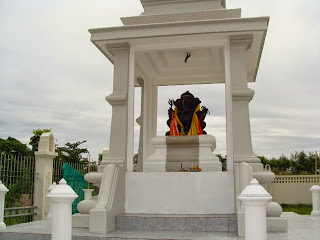 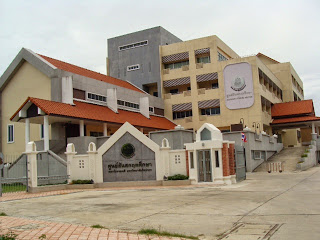 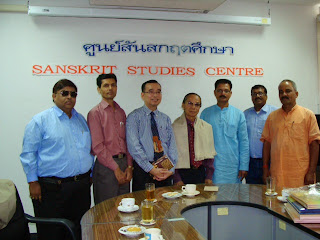 Deear Dr Bhadesia,
Nice to go through your write-up! Having been involved in its coming up, I am delighted to read your words. Many facts require to be added up about which we talk later!
At the moment, I am worried that there is no scholar from Gujarat registered to come to the forthcoming World Sanskrit Conference. How about you? You can come as a scholar observer too! regards
Amarjiva