Communal violence Bill 'not needed'
Special Correspondent
Existing laws are enough to prevent communal violence, say experts
Speakers at a seminar on the proposed "Communal and Targeted Violence Bill 2011" described it as unconstitutional and fissiparous in nature, and claimed there was no need for such a law as the existing laws were efficacious enough.
At the seminar organised under the auspices of the Advocates for Dharma here on Sunday, former judge of the Supreme court K.T. Thomas said it would not stand the scrutiny of the Supreme Court as it was not just, fair and reasonable to become a Law as envisaged by Article 21 of the Constitution.
Debunking the superficial understanding of the term "secularism", he said "it transcends religion and is about the individual dignity of the person concerned."
This Bill would reverse the process of integration, which had been achieved after the balkanisation the country had suffered during the British rule. It would hit the country's unity and integrity, divide the society and disrupt its harmony. "Hence, this is a Bill intended for disintegration" and "targeted for vote banks", he alleged.
Former Director of the Central Bureau of Investigation Joginder Singh described it as an "absolutely stupid Bill" designed for "vote bank politics". He wondered why this was not applicable to Jammu and Kashmir where the problem was acute. In a bid to curry favour from about half-a-dozen communities, this would be unfair to most of the communities in the country, he lamented.
While asserting that India had never discriminated against the minorities, he reeled out statistics to show how several Muslims held positions of prominence such as that of the President. "This Bill is more appropriate to Pakistan than to India."
S. Gurumurthy, Vice-President of the Dharma Raksha Samiti, said Indian society had already been functioning harmoniously and that "this Bill is an interference". This was an attempt to make "criminal law stand on its head", he observed. He wondered how such a Bill could be conceived and alleged that it was the product of an "evil mind". It was the failure of the "elite" that had allowed a free run for such evil minds, he lamented. Other speakers alleged this Bill was nothing but "divide and rule" and was a "poison" to the fabric of society and hurt its pluralism. It was a "motivated" Bill. This was meant to protect a "group" which was flawed in law because all are equal before law. Besides, despite having a number of legislations to protect Scheduled Caste and Tribe people, it was a "camouflage" that they had been clubbed with the "linguistic and religious minorities". This was a colourable exercise of power.
http://www.thehindu.com/news/states/tamil-nadu/article2565754.ece 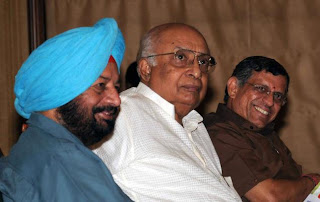