Political Rivalsy , to blame each other and when time come for Power, they unite, shamelssly 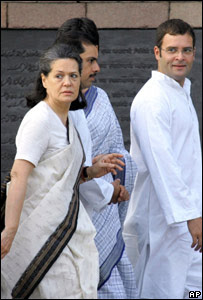 Manigachi (Bihar) In controversial remarks, RJD chief Lalu Prasad has said the Congress too was responsible for the demolition of the Babri mosque as it did nothing to prevent it.

"Babri masjid was razed to the ground and Congress too is responsible for it as it did nothing to prevent it," he said addressing an election meeting at Manhgachi in Bihar's Darbhanga district on Friday.

"If anyone continues to talk nonsense, I will reveal more," he said, without elaborating.

Lalu, who had recently been chastised by the Election Commission for his 'crush-under-the-roller' remark against BJP candidate Varun Gandhi, described the saffron party as 'Bharat jalao party'.

"The BJP is Bharat jalao party. It wants to see that India is up in flames," he said.

Accusing Bihar Chief Minister Nitish Kumar of calling up district magistrates and commissioners pressurising them to recommend cancellation of voting at polling stations in areas of influence of RJD, Lalu said, "I am least worried; the more they will try to harm me, the more votes I and my allies will get."

A wave is blowing in favour of the alliance of RJD-LJP-SP, he claimed.