Today is 26th June.
Spare only Five minutes to read and remember this.

During 1973–75, political unrest against the Indira Gandhi government increased across the country. (This led to some Congress-party leaders to demand for a move towards a presidential system, with a more-powerful directly elected executive.) The most significant of the initial such movement was the Nav Nirman movement in Gujarat, between December 1973 and March 1974. Student unrest against the state's education minister ultimately forced the central government to dissolve the state legislature, leading to the resignation of the chief minister, Chimanbhai Patel, and the imposition of president's rule. After the re-elections in 1975, Gandhi's party was defeated by the Janata alliance, formed by parties opposed to the ruling Congress party. Shri Babubhai J.Patel was the C.M. supported by Chimanbhai Patel's small group. Coz of this emergency was not imposed in Gujarat but as directed by I.Gandhi he withdrawn the support which lead Gujarat also under emergency.

In March–April 1974, a student agitation by the Bihar Chatra Sangharsh Samiti received the support of Gandhian socialist Jayprakash Narayan, referred to as JP, against the Bihar government. In April 1974, in Patna, JP called for "Total revolution", asking students, peasants, and labour organisations Non-violently  transform Indian society. He also demanded the dissolution of the state government, but this was not accepted by Centre. A month later, the railway-employees union, the largest union in the country, went on a nationwide strike. This strike was brutally suppressed by the Indira Gandhi government, which arrested thousands of employees and drove their families out of their quarters.

Shri Rajnarayan who had been defeated in parliamentary election by Indira Gandhi, lodged cases of election fraud and use of state machinery for election purposes against her in the Allahabad High court. Shanti bhushan fought the case for R.Narayan. I.Gandhi was also cross-examined in the High Court which was the first such instance for an Indian prime minister.

On 12 June 1975, Justice Jagmohanlal Sinha of the Allahabad High Court found the prime minister guilty on the charge of misuse of government machinery for her election campaign. The court declared her election null and void and unseated her from her seat in the Lok Sabha. The court also banned her from contesting any election for an additional six years. She was held responsible for misusing government machinery, and found guilty on charges such as using the state police to build a dais, availing the services of a government officer, Yashpal Kapoor, during the elections before he had resigned from his position, and use of electricity from the state electricity department.

Because of above however, strikes in trade, student and government unions swept across the country. Led by Jay prakash Narayan (JP), protesters flooded the streets of Delhi close to the Parliament building and the Prime Minister's residence. The persistent efforts of Narayan were praised worldwide as it took over four years for Justice Sinha to pass judgement against the prime minister.

.......
She went to Supreme court and it gave her stay but cancelled her power to vote in Parliament however, she was allowed to continue as Prime Minister. But she guess that in near future she will not be on the PM's chair. Her nearest political adviser S.S. Rey (CM of W.Bengal) advice  to take action as decided months ago. He has advice to prepare list of RSS leaders long back all over the country.
Emergency i.e. MISA Act normally can be applied if there is heavy internal problem in the country or at the time of war with out side enemy. But in absence of both reason it was imposed by Indira Gandhi thor'President Fakryddin ali Ahmed under Article 352(1) of the Constitution for "internal disturbance". After a quick question regarding a procedural matter, President Fakryddin ali Ahmed declared a state of internal emergency upon the prime minister's advice on the night of 25 June 1975, just a few minutes before the clock struck midnight. Emergency was in effect from 25 June 1975 until its withdrawal on 21 March 1977, only because she lost the seat in election and don't want to get down from the PM's chair.
Within three hours, the electricity to all major newspapers was cut and the political opposition arrested. The proposal was sent without discussion with the Union Cabinet, who only learnt of it and ratified it the next morning.
About two lakh people were jailed with-out any charge. More then 37000 publications were under censorship...
Film stars have to obey orders of Sanjay Gandhi, her friend Rukhasana Sultan & group. Kishorkumar took objection, his songs were banned on D.darshan and Aakashvani. Hemamalini was not in a position to attend Govt. function was brought forcefully, these are the examples. Shr I.K.Gujral the Information minister was replaced by Mr. Shukla very near to the family. Nobody in a position to oppose.
Lakhs of people, & all opposition leaders were in Jail including Shri Vajpayee, Morarji Desai, Advani, Vijayaraje Sindhiya, Charan Singh, Krupalani, R.Narayan all...all and above all Shri Jayprakash Narayan.
Organizations like RSS were banned. At least nine high courts pronounced that even after the declaration of an emergency a person could challenge his detention. The Supreme Court, now under the Indira Gandhi-appointed Chief Justice A. N. Ray, over-ruled all of them upholding the state's plea for power to detain a person without the necessity of informing him of the reasons/grounds of his arrest or, to suspend his personal liberties or, to deprive him of his right to life, in an absolute manner (the habeas corpus case').Many political workers who were not arrested in the first wave, went 'underground' continuing organizing protests. Abuse and torture of detainees and political prisoners was very simple.
More then 3rd degree was used on people in jail.
Because of censorship more then 50% pages of the leading News papers were coming Blank. Many of the News papers who opposed have to close their presses. Ramnath Goenka and it's Express group gave very good fight against Govt. Many of their publications were banned or closed down in very bad manner.
At present for very small things Media can criticize Govt. were became "Miyau" at that time. Even you might have realized this time our media is acting more freely on emergency then congress ruling years.
--------------------------
Role of RSS:
"Rashtriya Swayamsevak Sangh" which was seen close to opposition leaders, and with its large organizational base was seen as having the potential of organising protests against the Government, was also banned. Police clamped down on the organisation and thousands of its workers were imprisoned. The RSS defied the ban and thousands participated in Satyagraha (peaceful protests) against the ban and against the curtailment of fundamental rights. Later, when there was no letup, the volunteers of the RSS formed underground movements for the restoration of democracy. Literature that was censored in the media was clandestinely published and distributed on a large scale for the movement. Networks were established between leaders of different political parties in the jail and outside for the co-ordination of the movement.

The Economist described the movement as "the only non-left revolutionary force in the world". It said that the movement was "dominated by tens of thousands of RSS cadres, though more and more young recruits are coming". Talking about its objectives it said "its platform at the moment has only one plank: to bring democracy back to India".

The struggle against Indira's dictatorship and fight against emergency were Planned, Organized, Lead by some prominent persons of Sangh parivar like Manya Nanaji Deshmukh, Manya Dattopant Thengadi, Manya Ravindra Verma (of old Congress) etc. Shri Govindacharya and Shri Ram Bahadur Roy were the two youth leaders who played a key role in starting the JP movement. There have been a host of others in various states whose plans, efforts etc. were behind this nationwide struggle and it's success. Our PM Shri N.Modi also handled successfully the under ground movement in Gujarat and Indira police was unable to catch them till end. Shri Subramaniuam Swami and Shri Makrand Desai were successfully went out of India and continue the fight from there. Plus they gave the correct information to international organizations like "Amnesty International" fighting for human rights. (It is a non-governmental organisation focused on human rights with over 7 million members and supporters around the world. Founder Mr.Peter Benenson who founded it in July 1961 at London.
Today's Media may not be knowing Or don't want to publish this work and sacrifice but it is fact. Many people when they come out from jail were in very bad condition health wise including Shri Jayprakash Narayan.
Finally, Indira Gandhi declared election and people voted against her,
She lost the power. And Janata Govt took place in leader ship of Shri Morarji Desai as Prime Minister. 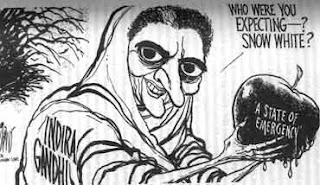